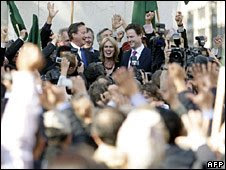 For the last 15 months or so my frustration has been that the nation has really not grasped the essence of Nick Clegg. He has been characterised as "Cameron Lite" - a bit like mistaking Handel for the Spice Girls. One speaks from a depth of conviction, a preparedness to stand by those convictions regardless of the consequences .........the other from the shallowness of expediency, popularism and the need to secure as many votes as possible, for the least amount of effort in the shortest amount of time. Clegg is prepared to nail his colours to the mast, however unpopular his position - Cameron on the other hand plays a cunning hand of poker - never revealing his hand, but somehow executing the exquisite bluff that leaves the unsuspecting believing he has actually said something!

So today I was delighted - at last - not before time - the nation is beginning to see what our man is made of, what many of us have always known - that we have a leader who will fight for what he believes in - popular or not. He has undeservedly had his light somewhat hidden under the remarkable "bushel" that is Vince Cable (!) but at no time has he shown the slightest irritation or pique. He has clearly demonstrated his underlying motivation - not for his own grandisement - rather of his undeniable commitment to the achievement of a truly liberal and just society. The motivation and commitment that leads Nick to champion the just cause of the Gurkhas will lead him to demonstrate what separates him from the shallowness of Cameron and the arrogant discordant disconnect of Brown (if Clegg is Handel and Cameron is the Spice Girls - maybe Brown is Stockhausen - (with apologies to Stockhausen fans!) admired by a few but unintelligible to most of us!)

Oh dear, this is sounding a tad to sycophantic - don't worry Nick/Tim/Matthew/Greg et al..........normal service will resume before you can say Jack Robinson.........or is that Linda Jack?!
Posted by Linda Jack at 09:54 No comments:

East Midland Trains - an example of the benefits of privatisation!

Last night I went to the National Liberal Club for an ALDE reception. It was a great evening and entertaining given I was seated between two of our esteemed peers, Navnit Dholakia and John Lee. I confess I spent some of the evening making the case for revisiting our Trident policy - but about 10.45 began my journey home. I knew I was pushing it to get the 11.15 East Midlands train back to Luton, but my delight at making it was soon dented by seeing the "DELAYED" signs.

The story was that a train engine was on fire near Luton and there were no trains running. The transport police informed us that we should make other arrangements as there were no coaches. I toyed with the idea of staying over with a pal, but decided against it, given that my "evening" attire was not quite the ticket for the hustings at Brentwood School I was attending in the morning.

I headed over to King's Cross, just in time to jump on a train to Hitchin - thankful that I no longer lived in Bedford when my alternative routes would have had to be Milton Keynes of Sandy. But even going to Hitchin meant a £20 taxi fare home.

However, my irritation faded into insignificance as I travelled into London this morning with my daughter and her friend. Her friend had been on the 8.20 train out of St Pancras last night and they had been stuck for four hours outside Luton! It took that long to turn off the electricity apparently - then the whole train were given glowlights and guided the half hour walk up the track to Luton Airport Parkway. The company included an elderly lady who had to be carried, and many with heavy cases who also had to be helped.

Then this evening I read Duncan Borrowman's blog, who had been stuck coming the opposite way and ended up having to take a taxi all the way home! So two important questions about a company (along with First Capital Connect whose services were also affected) with little on no regard for passengers. Not only do they pay scant regard for the hundreds of stranded commuters, clearly having no contingency in place to get them home, but also they have no contingency in place to deal with passengers stranded on the track. How and why on earth did it take 4 hours to "rescue" stranded passengers?

If ever there was a graphic demonstration of the problem of proxy customers - this is it. Our privatised train companies have a captive audience. We have no other realistic alternative, and they know it - we can't vote with our feet because our feet have no place else to go. I have never travelled on East Midland trains when there has been a problem and found anyone who thinks privatisation was a good idea. Frankly we are all treated like compliant mushrooms. Now I understand there may be an argument that the problem is that privatisation hasn't gone far enough - that may be the case - whatever - the truth is that this half way house serves none of us ........except of course the private rail companies and their shareholders - well, wouldn't you be laughing all the way to the bank with this sort of monopoly?
Posted by Linda Jack at 00:14 3 comments:

Being a Lib Dem Trade Unionist is a bit like being a Trade Unionist Lib Dem......regarded with suspicion in all quarters! So today, having come from a union meeting at work (watch this space - we will be going for recognition at the FSA) I arrived home to an email from Derek Simpson and Tony Woodley asking me to sign a petition for jobs and pass it on to my pals - which I have done.

BUT.............Last week I read an interesting article in my Unite Activist newsletter written by a Labour MEP candidate. Hmmmmmmmmmmm thought I. I am a Unite activist. I am an MEP candidate. I am committed to protecting workers rights (unlike this present wolf in sheep's clothing Tory government). Maybe I can write an article in the newsletter? I have asked. The editor has no problem. But he has to run it past the political department..........he thinks they may have a problem. Yes, of course. The Labour Party are so committed to trade union values, their MPs will all sign that petition won't they? Er.......don't think so.

So, will they have a problem with publishing my article?